The Friedland transit camp is the location of an important, and very emotional, scene in my book Endless Ordeal. 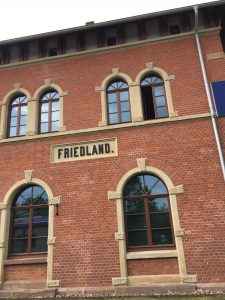 Therefore I visited the Friedland Museum to get a better feeling for the place. Six hours in the museum and I filled with crucial information, but also completely exhausted.

First installed in 1945 under the British administration this immigrant camp has been in place ever since and has processed more than 4 million persons so far.
The main reasons to chose this place were the location at the border triangle of the American, British and Soviet zones, and the fact that it had a train station with undamaged railway tracks. 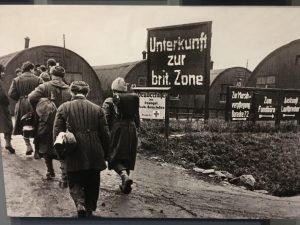 After WW2 people came as refugees, expulsees, released prisoners of war, and displaced persons. Ex-POWs from the Western Allies came here before returning to their families in the Soviet Zone and ex-POWS of the Soviet Union passed through the camp as late as 1955, ten years after the end of WW2.

They were welcomed with hot chocolate and bread mainly by one of the female workers of the Caritas, the British Salvation Army and the International Voluntary Service for Peace (IVSP) and had then to “run the gauntlet” of registering in a dozen different huts and get the respective stamps needed for ration books, clothing, housing assignment, search of lost relatives and friends, etc.

During that time amenities were still very basic and consisted mainly of Nissen huts, invented by the Canadian officer and engineer Peter Norman Nissen 1916. On the picture you can see a reconstructed Nissen hut.

Over the years thousands of unaccompanied children from behind the Iron Curtain arrived in Friedland to be reunited with their parents, from whom they’d been torn apart years earlier in the turmoil of the battles of WWII.

Friedland, by the way, means “Land of Peace”, and it surely lived up to this name. Most everyone was elated to finally arrive after a flight fraught with perils and ordeals. During the more than 70 years of its existence, all people in need from wherever they came, were received with open arms. 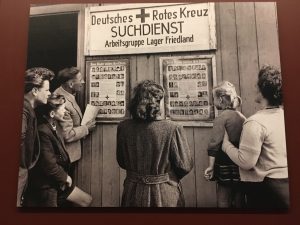 In 1953 Poland expelled (or released as they liked to call it) 25.000 ethnic Germans and sent them to Friedland. In the beginning it looked like a tragedy was about to unfold: the Russians let the first transport pass the East German border into the five-mile stretch of no-man’s land between Ahrenshausen and Friedland.

But on the other side, the British authorities found out that 90% of the incoming people were not on the previously agreed list of names the Russians had sent. 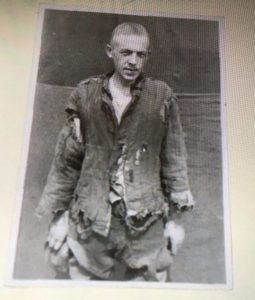 Like good bureaucrats, they returned everyone whose name wasn’t on the list. The tired, cold, and hungry people drudged back the 5 miles just to be turned away again, since they were no longer welcome behind the Iron Curtain.

For three days these people were stranded in no man’s land and only thanks to the incessant begging of the Salvation Army stationed at Friedland camp, did the authorities allow them to bring food and blankets to the unwelcome arrivals.

In the end, compassion prevailed and the British commandant said that while he strongly forbade the illegal immigrants to enter Western Germany, he needed to leave the border to attend other business. 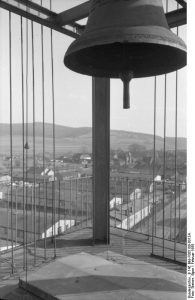 As soon as he was gone, the prime minister of Lower Saxony (a German state) ordered the German customs police to open the turnpike. To save face, the prime minister was punished by the British administration with 3 days of “Grenzverbot”,  the ban to go near the border.

Toward the end of the 50s German expelles from China arrived, and throughout the separation of Germany, fugitives from the Soviet Zone were registered here before they moved on to their final destinations.

In the 60s and 70s, thousands of immigrants from Korea and Vietnam sought asylum in Germany due to the respective wars in their countries. Another wave of  asylum seekers came to the transit camp during Glasnost and Perestroika: People with German heritage from all over the Soviet Union and even Jews (who would have believed it?) who were prosecuted in the Soviet Union and wanted a better life in Germany.

In 1989/90 the camp was flooded with thousands of refugees daily, fleeing the GDR across Hungary and Austria. Even with more than 45 years of experience as an immigrant camp, the administration was overwhelmed.

Fugitives arrived faster than they could be registered and passed on to relatives, friends or other camps. During this time some had to sleep on the bare ground for a night or two, just like in the first years of the camp’s existence.

Today the immigrant camp is still working, but now the people flocking to this crossroads of fates come from war-torn countries like Syria, Palestine, Afghanistan, Pakistan, etc. And the sad prospect is the Friedland camp will be needed for many decades to come.