When I was outlining the second book about Margarete, the Jewess hiding from the Nazis right under their noses, I found the perfect location for her to wait out the war: Plau am See, a quaint little village in the Mecklenburg Lake District about two hours drive from Berlin. 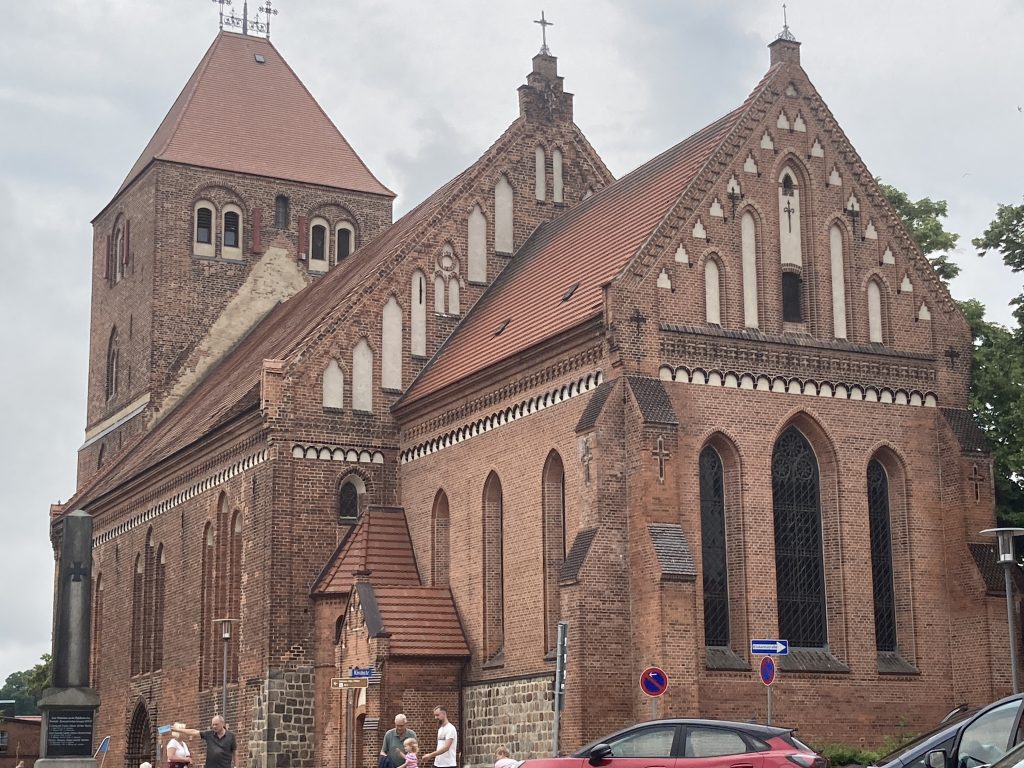 Since I like to visit the places where my novels take place I planned a trip to visit not only Plau am See, but also Malchow on the other side of the lake and the nearby former munitions factory. There, I rented a bike and rode the six kilometers to the site.

Unfortunately there isn’t much left of the factory, due to blasting important buildings before the arrival of the Russians, dismantling for reparations and eighty years of abondonment. The forest has claimed back the area and overgrown most everything, but climbing up an down the earth walls and ditches between what was left of the concrete bunkers almost made me feel as if the factory was still there.

The photos don’t do it justice, but even cleaned from fallen leaves and branches, it must have strenuous to walk from one bunker to the next. 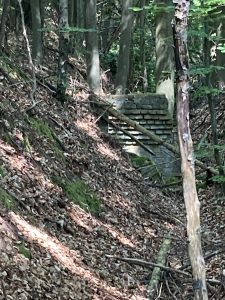 Next to the road going from Malchow to the harbor in Lenz I found a huge concrete block and assumed that this must have been the entrance to the compound. 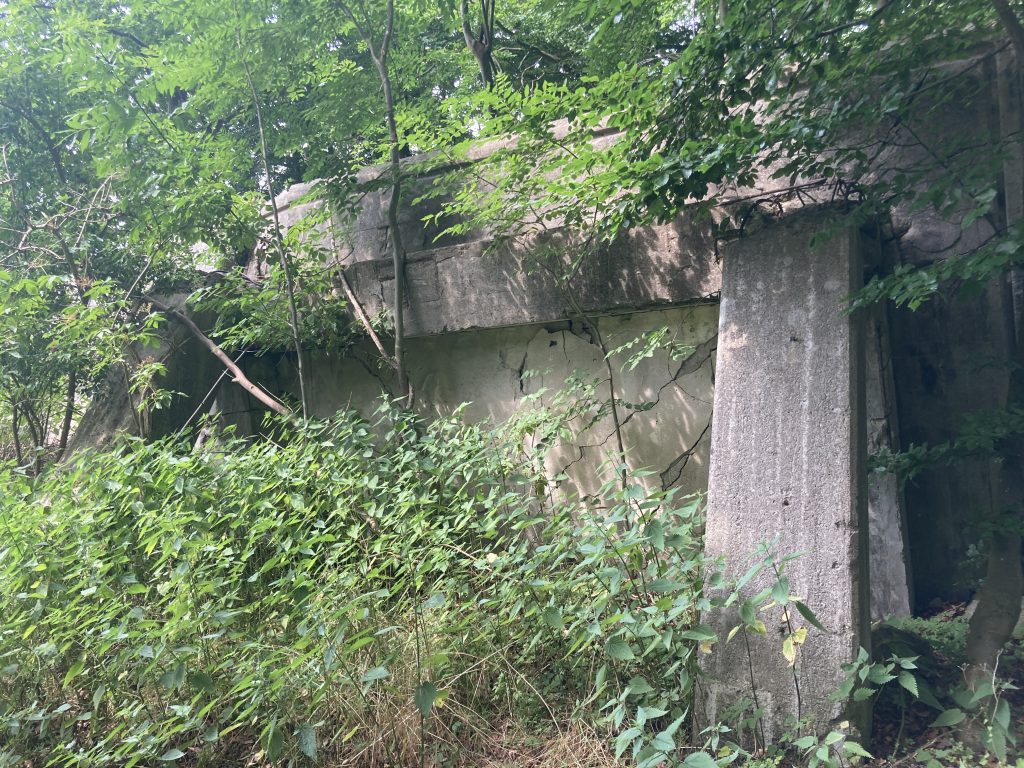 Just to give you an idea about the sheer size: the grounds of the factory used to be 360 hectares (1.4 square miles), with countless small concrete bunkers scattered in the forest. During the construction not more than 30% of the trees were cut down to conceal it from reconnaissance flights. Apparently the strategy worked, because according to documents, the Russians were quite surprised when they found a hidden factory in the middle of nowhere as they came to occupy the area.

The gray area to the left is the lake Plauer See and the entire light red area was part of the factory, while the dark red is the camp where up to 4000 prisoners lived at any one time. 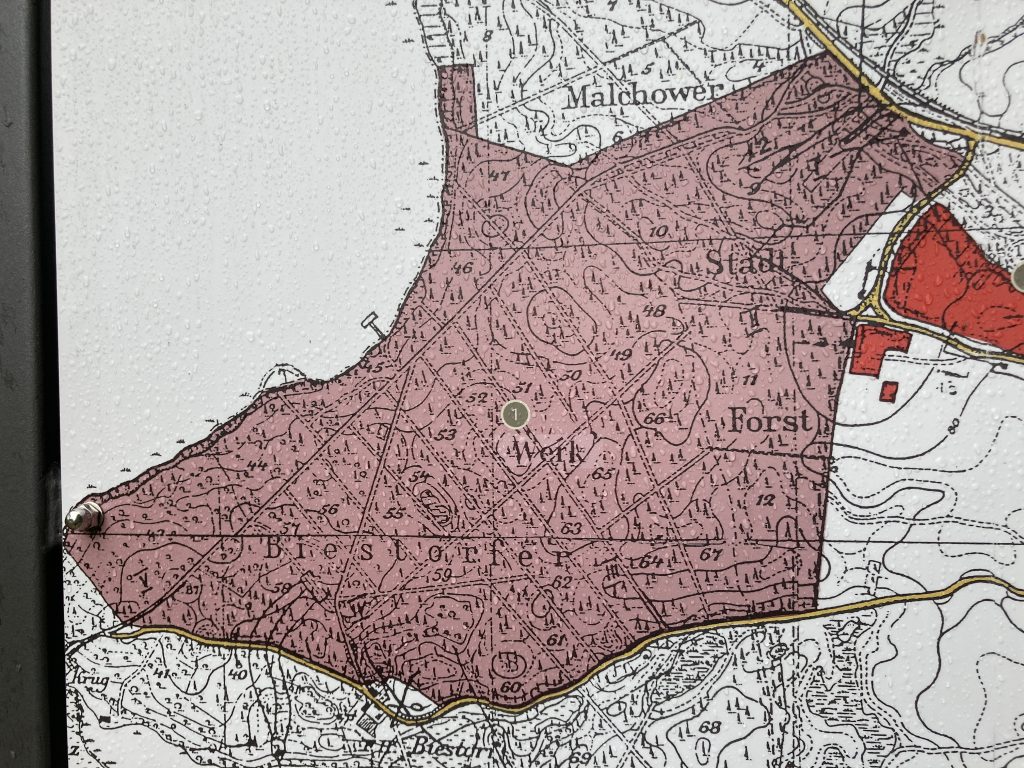 Area that belonged to the munitions factory, a total of 360 hectares

The main product was an explosive called Nitropenta, which is why in my novel From the Dark We Rise I call it “the Nitropenta Factory”.

As you may imagine, “cooking” the explosive was extremely dangerous and to minimize the risk of blowing the entire place, the production was split up and done in small concrete and brick bunkers, separated by earth walls, like the one you can see on the image below. This way if an explosion happened, only the affected bunker was damaged, and prodcution continued in the others.

Don’t ask whether I had a peak inside that dark, gaping hole, since I was alone out there and too afraid to stumble. Or perhaps I dreaded meeting the ghosts of the tortured souls. 😱In any case, that photo is as close as I dared to get. 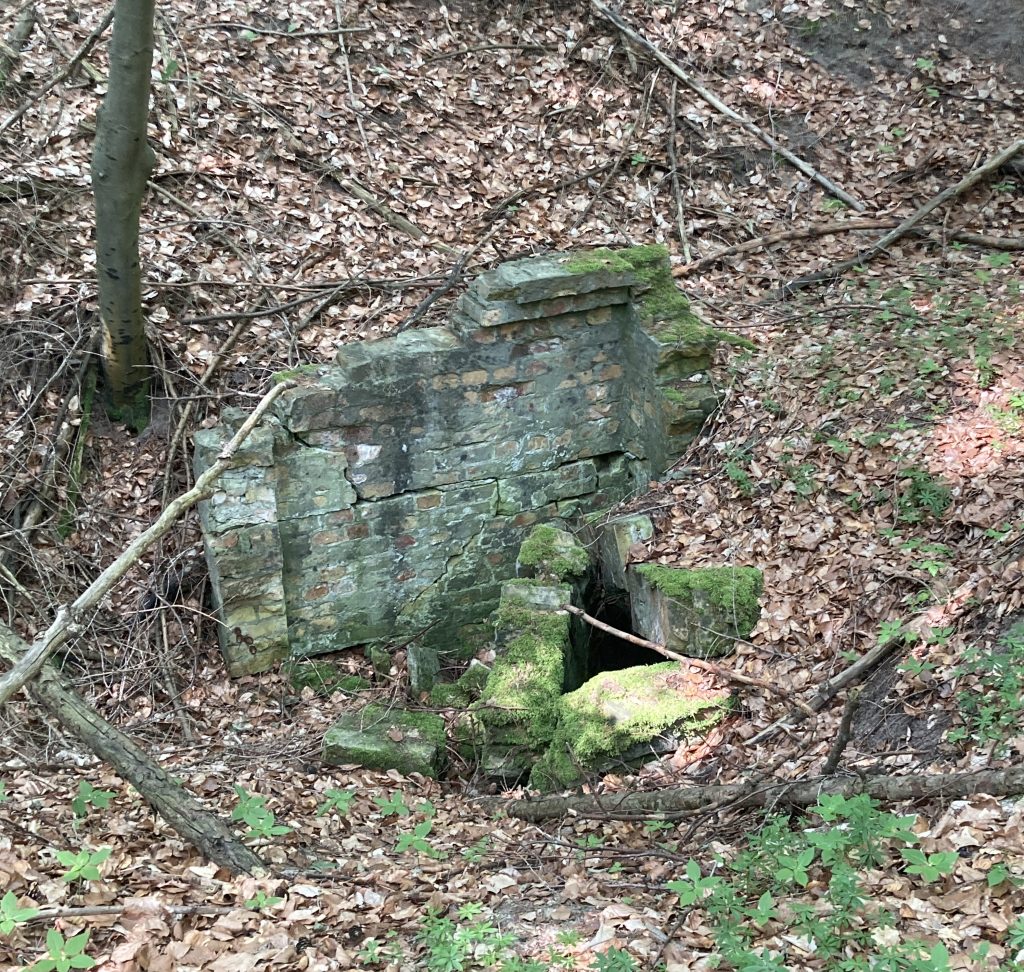 Since there wasn’t much left to see in the forest, I rode to the memorial site where the camp had been. Every morning and every night after their backbreaking twelve hour shift, the prisoners had to walk at least half an hour from their workplace to their baracks, located several hundred yards away from the town of Malchow.

When I was there, the area experienced diluvial rains and I got soaking wet like a drowned rat. For me, it was just a nuisance, because at the end of the day I returned to my accomodation, took a hot shower and changed into dry clothes. But the prisoners back then didn’t have clothes to change, and definitely not a hot shower, so they would have had to go to sleep wet and freezing.

The rain thwarted my plans by morphing the road into a veritable river as you can see below. Therefore I took a detour around and decided to visit the camp memorial the next day. 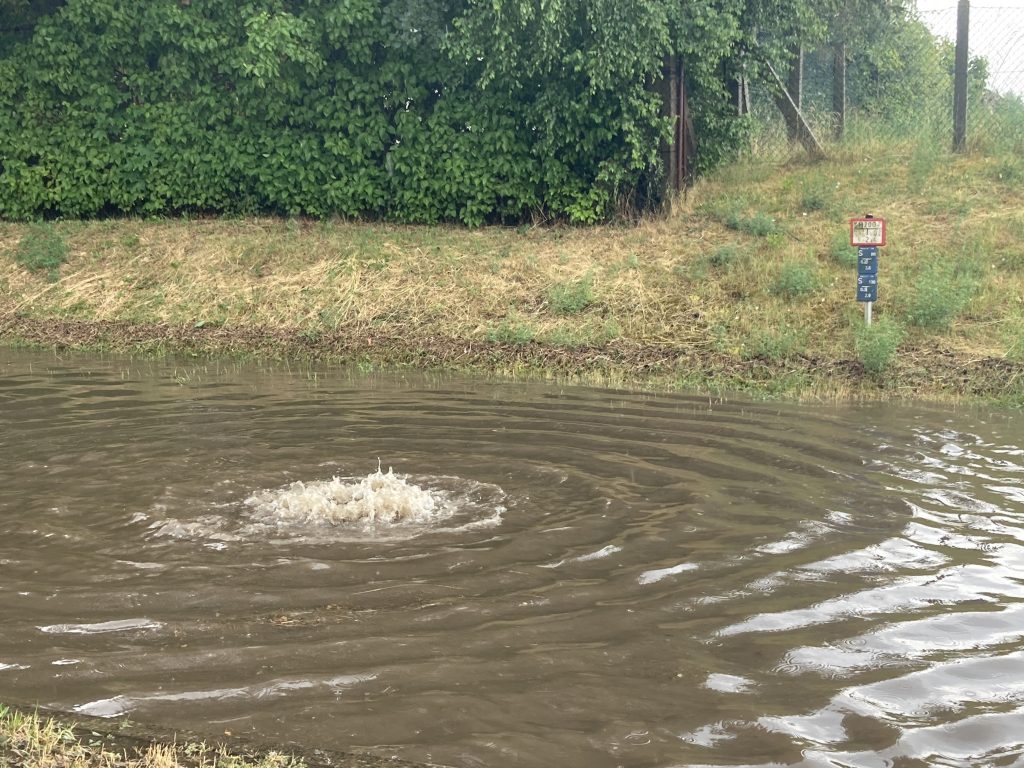 Even though it had stopped raining, the weather was rather depressing – perhaps appropriate to visit the former camp. There’s an empty space and some fenceposts that look menacing even without the attached barbed wire. Because I arrived early in the morning, I was the only living soul, which made the atmosphere all the more eerie.

That might sound strange to you, but if you ever visit a concentration camp memorial and take your time to pause and listen, you’ll experience the anguished vibes these places emit. Just look at the photo and tell me you don’t feel chills running down your spine. 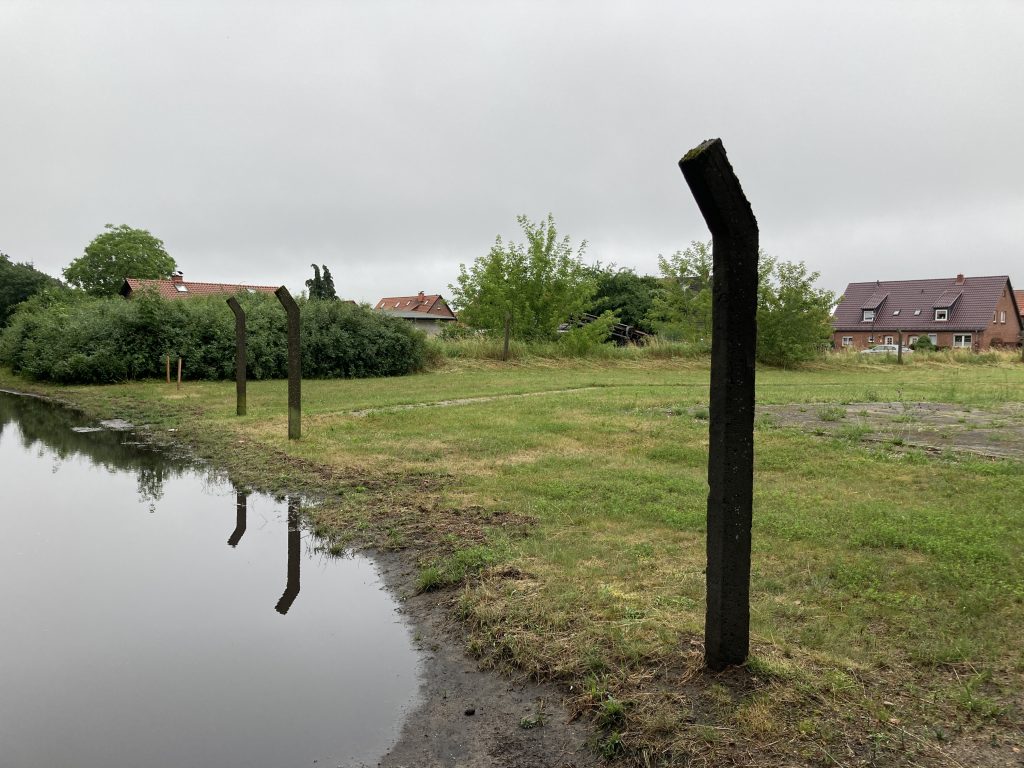 Most of the workers were women, foreign workers from Poland or the Soviet Union, but there was also a subcamp with mostly Jewish prisoners from the concentration camp in Ravensbrück. 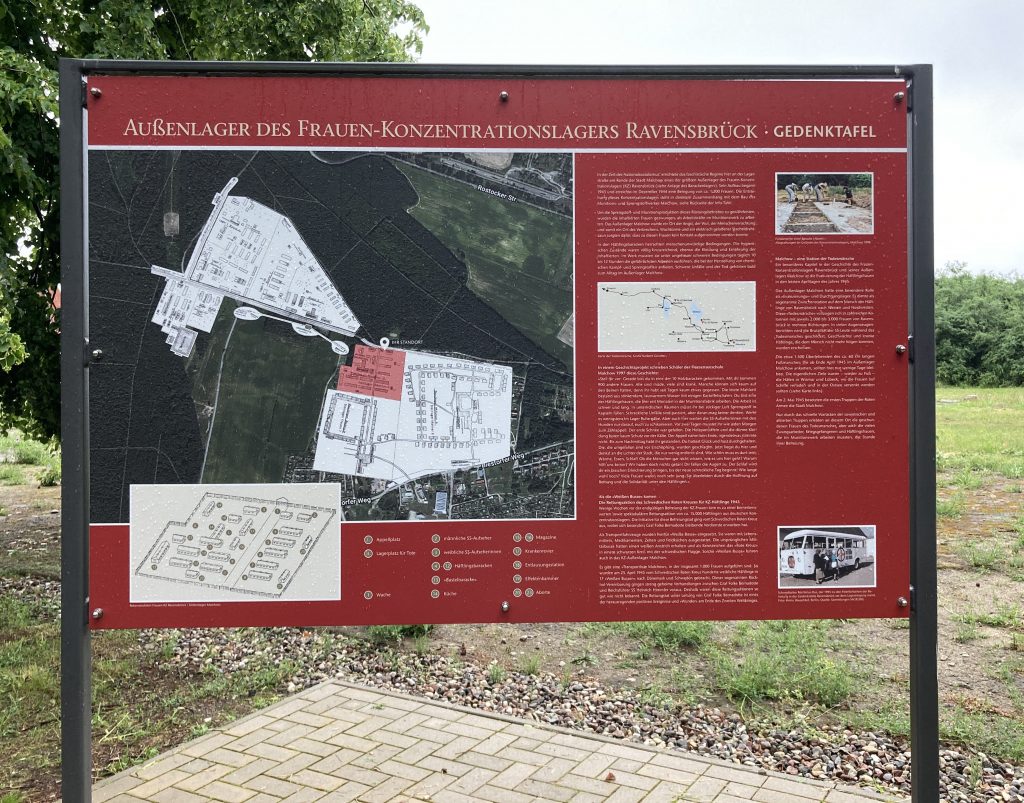 Map of the camp. The red area is where the memorial site is today.