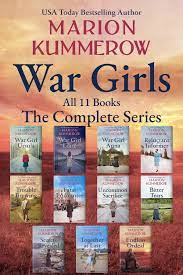 This is the complete collection of all 11 books in the War Girl Series.

War Girl Ursula is the bittersweet love story between a German woman and a British pilot. The eldest Klausen daughter, Ursula, must choose between morality and obedience when the wounded man asks her for help.

War Girl Lotte: the nestling Lotte is impulsive and outspoken, and a passionate fighter for justice. When she discovers four Jewish children on the run, her life finally has a purpose. But her act of humanity may cost her and those she loves dearly.

War Girl Anna: middle daughter Anna wants to be a human biologist, but when she discovers a horrific secret, she must choose between career and morality. Hidden from the world, gruesome things are happening – and Anna is soon caught in the middle.

Reluctant Informer: Sabine Mahler, the Klausens’ lodger, is not who she claims to be. Her husband’s survival depends on her willingness to cooperate with the Gestapo.

Trouble Brewing: Richard is a soldier. He obeys orders, until he sees her. She works for the Polish resistance, saving her life is a crime against Führer and Fatherland. When fate reunites them at his most vulnerable time in life, he must choose: Fight for his country or become a traitor of conscience.

Fatal Encounter: Lotte Klausen and her Polish brother-in-law Piotr Zdanek are both in Warsaw on the eve of the Uprising — on opposing sides. When they meet during the heat of the battle will they be able to save each other’s lives or does the war between their countries tear the family apart?

Uncommon Sacrifice: Held captive in a notorious Nazi camp, Peter clings to the dream of freedom. But when his wife Anna stages an escape for him, he has to leave his injured brother Stan behind.

Secrets Revealed: Officially employed as a radio operator for the Wehrmacht, Lotte is, in fact, a spy for the British service, risking her life to defeat the Nazi forces. When her contact in the Norwegian resistance is captured, a race against time begins.

Together at Last: Loving her is a crime that could ruin his entire military career. RAF pilot Tom is desperate to find the woman he left behind in Nazi Germany. When he finally does, he discovers he can never be with her.

Endless Ordeal: Surrendering to the Russians is Wehrmacht Leutnant Johann Hauser’s only option. Whisked away into the vast lands of the Soviet Union, he and his comrades cling to life by a thin thread. The fighting never stops, but their new enemies are hunger, cold, and exhaustion.