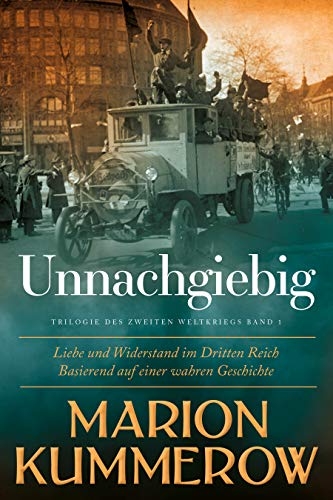 Just the suspicion is enough …

There is no evidence.
He is released anyway.

With Hitler’s seizure of power, life in Germany is changing. No one is safe from arbitrariness and violence.

The chemical engineer and inventor Q decides to fight back. With the weapons of science he wants to fight fascism and the Nazis.

But the resistance against the Nazis does not only endanger his own life …
… but also that of the woman he wants to marry.

Hilde Dremmer has witnessed enough acts of violence by the Nazi government to be appalled.

But is that enough to live a life of constant fear?

When Q reveals his double life to her, she must make a decision: a sheltered life without him, or a life in mortal danger at his side.

Relentless is the first part of the trilogy Love and Resistance in World War II. It is based on the true story of two brave people fighting for their personal happiness in one of the darkest chapters of German history, while at the same time going to war against their own government.

Readers who have devoured Under Blood-red Skies by Mark Sullivan or The Nightingale by Kristin Hannah will like this novel.

Immerse yourself in a world of intrigue, danger and hope for a better future.

Relentless is the first part of a trilogy. Part 2 is called Relentless and Part 3 Unshakable.